Since 2009 I have been part of two teams studying the impacts of latitude, longitude and associated abiotic factors on the prevalence of Batrachochytrium dendrobatidis, a chytrid fungus, in amphibians throughout the United States. 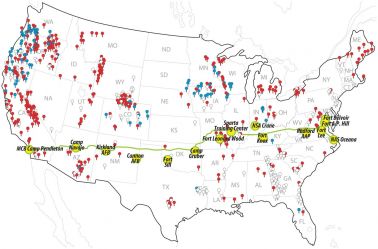 The first part of this project investigated the following questions at sites along an east-west transect from California to North Carolina (see figure at right):

The resulting publication is: Lannoo, M.J., C. Petersen, R.E. Lovich, P. Nanjappa, C.A. Phillips, J.C. Mitchell, and I. Macallister. 2011. Do frogs get their kicks on Route 66? Continental US transect reveals spatial and temporal patterns of Batrachochytriumdendrobatidis infection. PLoS One 6(7): e22211.

The second phase of this project addresses similar questions, but along three north-south transects in the United States.  The results are currently being analyzed.