Few other animal groups are as persecuted as rattlesnakes.  From old western movies where 6-foot-long rattlers rear up to strike a cowboy on horseback to outrageous folktales of rattlesnakes chasing humans, a lot of bad press has been directed at rattlesnakes.  In reality most rattlesnakes present very little threat to humans.  They are much more likely to lay quietly and let you pass than they are to rattle or even flick their tongues. 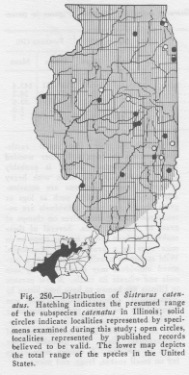 In his 1961 book, Amphibians and Reptiles of Illinois, Phil Smith documented the presence of massasaugas in 25 Illinois counties based on museum specimens and the scientific literature (Smith, 1961).

These records were limited to the northern four-fifths of the state, an area of about 80 Illinois counties, suggesting a widely scattered distribution. The sighting of a rattlesnake in Illinois has always been newsworthy, especially if it was associated with a snake biting a human.  A recent investigation using archived newspaper articles, many dating back to the mid-1800s, reveals that the massasauga was much more widespread in the northern four-fifths of Illinois than depicted in Smith (1961; figure at left), and may have originally occupied more than 50 counties.  In addition, these historical accounts indicate that some of these populations were quite large, with 50 or more individual snakes being encountered (and killed) in one summer.

This indiscriminate killing, along with draining of the prairies for agriculture, resulted in the reduction of massasauga populations. Surprisingly, this reduction was noted as early as early as 1887, when Oliver Hay (Hay, 1887: 213) wrote that the species was “excessively abundant on the then sparsely settled prairies of northern Illinois…as more of the land came under cultivation, these serpents rapidly disappeared; so that, where they were once so numerous, they have scarcely been seen for perhaps twenty years.”

By the late 1990s, there were documented populations in six Illinois counties; Lake, Cook, Will, Piatt, Madison, and Clinton.  All except the Clinton County population were very small, with less than 10 individuals per site encountered in a given year.  Exhaustive searching in the early part of 2000 pointed to a serious decline.  Outside of Clinton County, massasaugas were encountered only at one site in Cook County, and one in Piatt County.  The Cook County snakes were taken into captivity to start a breeding program and continuing search effort in Piatt County has resulted in no encounters for the past four years.  Today, all indications are that Illinois has one population remaining—in Clinton County. 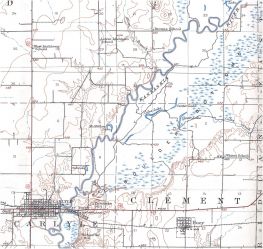 The Clinton County population inhabits the southern shore of Carlyle Lake, ENE of Carlyle, Illinois. Carlyle Lake is a man-made reservoir that inundated 26,000 acres when the dam across the Kaskaskia River was closed in 1967.  How the massasaugas survived this onslaught in not clear.  What we do know is that a large portion of what is now underwater was covered by bottomland hardwood forest called Boulder Bottoms (see 1948 topo map, right).  This would have provided ideal habitat for the massasauga.  If populations were very large, it might explain how they managed to hang on after inundation.

It is not clear when the Carlyle Lake population first became known to Illinois biologists.  The first reference to massasaugas at Carlyle Lake that we are aware of is from Mike Morris, a herpetologist who compiled range maps for all Illinois amphibians and reptiles in the 1980s.  His massasauga map shows a dot in Clinton County at about the location of Lake Carlyle.  However, it was not until 1991 that any attempt to keep records on the Carlyle massasaugas was initiated.  It was then that Scott Ballard, District Heritage Biologist with the Illinois Department of Natural Resources (IDNR), began keeping track of when and where massasaugas were encountered at the lake.  Scott’s work showed that between 1991 and 1998 from two to 20 massasaugas were incidentally encountered each year.  Unfortunately, Scott also discovered that some of these encounters were the result of snakes being hit by lawn mowers or automobiles and others were snakes killed by uninformed park visitors or landowners. In 1994, the massasauga was listed as endangered in Illinois and this resulted in increased interest in the welfare of the species.

In response to the listing, we started studying the massasauga at Carlyle Lake in fall of 1998.  The initial purpose of our research was to conduct a systematic survey for massasaugas at the southern end of Carlyle Lake.  In Illinois massasaugas spend the winter hibernating underground in crayfish burrows, so we started by looking for appropriate crayfish habitat.  At Carlyle Lake this is grassland where the water table is seasonally elevated.  I identified a potential site and returned the following spring to start the research.  We were lucky enough to have chosen an area that is used by a large number of massasaugas.  To date we have documented massasaugas at over a dozen disjunct areas along the southern end of the lake, all on property owned or managed by the U.S. Army Corps of Engineers (USACE) or the IDNR.