This research started in April 2011 when we received a call from a Forest Glen (Vermilion County Conservation District) staff member.  Mushroom hunters had found dead box turtles at the preserve.  Although we are used to receiving calls about dead box turtles, especially in the early spring (as a result of cold snaps), this call was different; more than 50 dead turtles had been found and they were all found in a small area of the preserve. 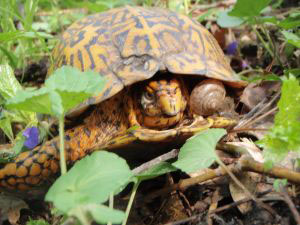 After a few days of fieldwork in the area of the die-off, the total number of dead box turtles was over 65.  In addition, we discovered 12 living box turtles in the same general area, five of which had missing limbs with open wounds (see photo, below. The snail is eating the fresh wound where the front limb is missing.) and were near death.  Subsequent work in the lab of Matthew Allender revealed a bacterium present in the wounds of these turtles, and all eventually died. The seven live turtles showed no signs of infection; no missing limbs or wounds.

The box turtle mystery at Forest Glen motivated us to begin a regional box turtle research program that we had been thinking about for several years.  In 2009, Jeannie Baker, a graduate student in my lab, began studying box turtles at Middlefork State Fish and Wildlife Area (Illinois Department of Natural Resources), near Collison, Illinois.  With incredible effort, she captured and permanently marked over 100 individuals and studied the movements of 25 for an entire activity season.  I conducted some follow-up work in 2010, marking a dozen or so more turtles.  I toyed with the idea of following this population every year for as long I could.  When the 2011 Forest Glen die-off occurred, we committed to extending the research at Middlefork and added Forest Glen as a second study area.  Since then, we have added two more, Middlefork Woods Nature Preserve in Kickapoo State Recreation Area (IDNR) and Kennekuck Cove County Park (VCCD), all in Vermilion County. The main focus of our research is to combine long-term ecological data on box turtles with ongoing health assessments.

The mysterious die-off at Forest Glen is not our only reason for initiating a long-term investigation of box turtles, although it certainly provided ample motivation.  Box turtles are long-lived (a 40-year-old box turtle is not unusual), and though they are relatively abundant in some localized areas, there have been reports of population declines in other areas.  Although there are ample reasons to study box turtles, and they are, in many ways, an ideal subject, one drawback is the difficulty in finding sufficient numbers to enable sound conclusions to be reached.

Enter John Rucker and his amazing  “turtle dogs.”  I had only heard stories of the incredible ability of John’s Boykin Spaniels to find large numbers of box turtles, but Matt had worked with John and his dogs for several years on his box turtle project in Tennessee. We decided to ask John if he could bring his dogs to Illinois to search our study areas for box turtles.  On John’s first visit, in May, the weather did not cooperate as the oppressive heat we all came to despise that summer had already set in.  Nonetheless, the dogs sniffed out 17 turtles at the Collison site on the first day.  On the second day, at Middlefork Woods Nature Preserve where we had previously found and marked only four turtles using human searching, the dogs found 14.

As we arrived at Forest Glen on the third day of John’s first visit, we were apprehensive.  After all, 65 turtles had died here just over a year ago.  Would there be any left for the dogs to find?  I wondered if we were wasting the time of John, his dogs, and the 12 human volunteers who came out to brave the heat.  The worrying was unnecessary as the dogs found 12 box turtles in just over two hours. Matt and I were so impressed with the dogs’ abilities we had John bring them back in June.  Results similar to those of May were achieved, but no one was prepared for what happened at Forest Glen; the dogs tracked down 33 turtles in just under two hours! Included among the day’s captures were three of the original seven that survived the die-off and the bacterial infection of 2011.  Finally, we had at least a partial answer to the concerns of that last field day in 2011.  The factors responsible for the infection and mass mortality we discovered at Forest Glen did not wipe out the local box turtle population.  There were survivors.  Exactly how they survived remains a mystery that we continue to investigate.